Amylin Pharmaceuticals donated over 500 boxes of office supplies to Sustainable Surplus.  “When the truck drove up I asked the driver if it was just for SSE,” said executive director Sue Prelozni.  “He told me, ‘yes,
and the truck behind us.”  She was astonished. 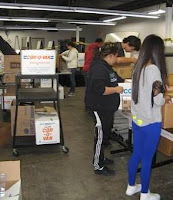 After over three hours of unloading, the sorting began.  Volunteer Michael Daly led the charge the first day.  Thereafter SSE held two “Sort and Separate” events.  Student volunteers from Mira Costa College, UC San Marcos and Trade Tech High School came to help.  “Actually, this is more like fun,” said one TTHS student.
“We put a good dent in the pile,” said Prelozni, “but it will take several more hours to finish the job.”  The sorting is actually preparation for the BYOB – Bring-Your-Own-Box
events.  Teachers and members of nonprofit organizations are invited to bring an empty box and fill it with FREE office supplies.  BYOB’s are held monthly at SSE’s warehouse space.

Posted by Sustainable Surplus at 5:58 PM