San Diego - March 22, 2013 – Mayor Bob Filner appointed Sue Prelozni of the Sustainable Surplus Exchange (SSE) to head up a new committee on sustainability education.  It was, for the most part, in jest.  However, Mayor Filner was serious when he described his campaign towards a cleaner, more energy efficient environment here in San Diego.

The mayor sited his plans to convert all the city buildings to solar power.  Realizing that it may not be feasible to retrofit some buildings, he said every effort would be made to assure sustainable energy and water saving measures were implemented.

Speaking at an engagement titled “In the Know,” hosted by the San Diego Association of Nonprofits, Filner addressed many questions asked by nonprofit leaders.  When Prelozni, executive director of Sustainable Surplus, asked Filner about how the city plans to educate local companies to be compliant with the new mandate AB 341 – requiring a recycle rate of 25% of solid waste -he acknowledged that it may take a special task force.

“It’s not a simple task,” Filner explained. To assure understanding, education and compliance of the bill is an elaborate process.  Thus, half-wittingly he appointed Prelozni to head up one such committee.

Filner entertained the audience with the offer of delegating other attendees to spearhead special interest committees to solve social issues in San Diego.  Ending with, “and that my friends is how you run a government office.”  Delegation.

Prelozni said she plans to follow up, in the least to keep the recycling mandate on the mayor’s office radar, but moreover, to actually assist in the education efforts that the mayor’s office deems appropriate for San Diego to achieve its recycling compliance.
Posted by Sustainable Surplus at 8:29 PM No comments:

Members of the Sustainable Surplus Exchange (SSE) team have been invited to attend the "In the Know" event on Wednesday, March 13 to meet with Mayor Bob Filner.  Hosted by the San Diego Association of Nonprofits, the event is designed to connect nonprofit organizations with their local officials and policymakers.
This first event provides the opportunity to meet Mayor Filner. “I’m really looking forward to meeting the Mayor and getting on his radar about sustainability here in San Diego,” said SSE executive director Sue Prelozni.  Filner has been very positive about environmental issues in recent news conferences.
“In the Know” is being held at McCormick and Shmick's downtown location.  Similar events will be held throughout the year for the nonprofit community to meet people from all levels of government and political proclivities.
Posted by Sustainable Surplus at 10:46 PM No comments: 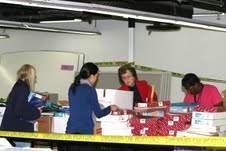 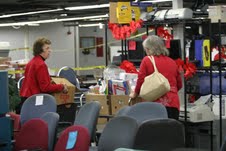 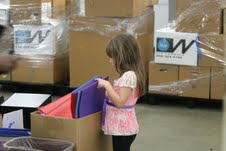 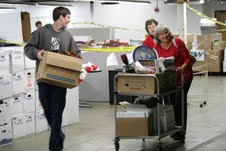 Due to the popularity and donations of local companies, the BYOB (Bring-Your-Own-Box) event will be a monthly event through summer.  “As long as we have the corporate support and supplies coming in, we will have this event monthly,” says CEO Sue Prelozni.
The Valentine’s BYOB was a huge success.  Over 100 boxes of free office supplies and oodles of desk-top organizers were given to attendees.  While participants are visiting the warehouse, they are also able to see the inventory and purchase whatever they need for their organization.  “We donned white boards, office chairs, bookcases and file cabinets at this event,” adds Prelozni.
The most popular item:  3-ring binders.   The longest distance attendee was from Tecate Christian School.  Diane Lyles, Vice-Principal, said that the savings more than made up for the trip.  “We really appreciate the generosity of Sustainable Surplus” and its donors.
The next BYOB will be March 12. Stay tuned for details.

Posted by Sustainable Surplus at 8:49 PM No comments: